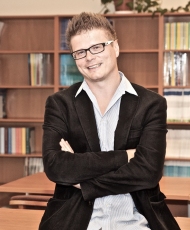 Neuroscience is my passion. In 1999 – even before I have finished my studies in Biology at the Jagiellonian University in Krakow, Poland I began working as a volunteer in the Department of Biochemistry at the Institute of Pharmacology Polish Academy of Sciences. This research work, carried out under the supervision of Prof. P. Popik and reviewed by Prof. J. Vetulani resulted in my master thesis, entitled „ Effects of memantine- a non-competitve NMDA receptor antagonist- on the acquisition and expression of conditioned place preference induced by sexual interaction in mice”, defended in 2001 at the Faculty of Biology and Earth Sciences, Jagiellonian University in Krakow. The results included in my master thesis were also described in a paper published two years later in Behavioural Pharmacology (Popik et al, 2003). Shortly after graduation I moved to Utrecht, The Netherlands, where I was awarded a scholarship allowing for 3-months research stay in the Department of Neuroscience and Pharmacology at Rudolf Magnus Institute. During this stay my research work, carried out under the supervision of Profs Mirjam Gerrits and  J.M. Van Ree, focused on the development of a model of psychological stress in rats. After returning from the Netherlands I received a scholarship for doctoral studies at the Ruhr University in Bochum, Germany, which I gave up after 8 months to pursue doctoral studies at the Georg August University in Goettingen, Germany. My research work, carried out in collaboration between the Department of Psychiatry and Psychotherapy, Georg August University and Laboratory of Clinical Neurobiology at the German Primate Center led to the development of a new, pre-clinical model of depressive disorder based on the chronic psychosocial stress and resulted in a number of scientific papers published in Behavioural Brain Research, Behavioural Pharmacology, Hippocampus, Neuropsychopharmacology, Progress in Neuropsychopharmacolgy and Biological Psychiatry, Cellular and Molecular Neurobiology and European Neuropsychopharmacology (Abumaria et al, 2006; Abumaria et al, 2007; Czeh et al, 2010; Czeh et al, 2007; Rygula et al, 2006a; Rygula et al, 2005; Rygula et al, 2006b; Rygula et al, 2008; Zambello et al, 2010). At that time I was working in 2 laboratories under the supervision of Prof. U. Havemann-Reinecke and Prof. E. Fuchs, and experimenting in the fields of psychiatry, experimental psychology and behavioural psychopharmacology. In 2006 I defended, at the Georg August University in Goettingen, doctoral dissertation entitled "Behavioural and Pharmacological Validation of Chronic Social Stress as a Model of Depression in Rats". My doctoral thesis constitutes a critical summary of the concepts, applications and verification procedures for the chronic psychosocial stress in preclinical modelling of depressive disorder.In 2006-2008, I continued my research at the Department of Psychiatry and Psychotherapy, University of Goettingen. In 2006, I was also delegated for 6 months, as a visiting scientist, to work at the Department of Behavioral Neuroscience and Drug Development Institute of Pharmacology Polish Academy of Sciences. During this time I focused my research on preclinical modelling of the phenomenon of negative contrast in rats using operant conditioning techniques. In 2008, I moved to Cambridge, UK to work as research associate at the Department of Experimental Psychology, University of Cambridge. While at Cambridge my research focused mainly on neuroanatomical and neurochemical substrates of cognitive flexibility and sensitivity to feedback in primates. My studies, coordinated by Profs. A.C. Roberts and T.W. Robbins resulted in a number of scientific papers published in the Journal of Neuroscience and Cerebral Cortex (Clarke et al, 2014; Rygula et al, 2014a; Rygula et al, 2010). The research work in Cambridge also constituted my current research interests, which orbit the cognitive impairment in mental disorders.In March 2011, as a laureate in the program Homing Plus 2/2010 funded the Foundation for Polish Science, I moved to the Department of Behavioral Neuroscience and Drug Development at the Institute of Pharmacology Polish Academy of Sciences in Krakow. Within the program I received personal scholarship, funds for 2 annual scholarships for master students and a research grant for accomplishment of the project entitled: "The pessimistic rat; a search for the new cognitive biomarkers of depressive disorder". In December 2011, I became also a laureate in the Iuventus Plus program funded by the Polish Ministry of Science and Higher Education (MNiSW) and received research grant to accomplish the research project entitled: "Cognitive affective bias in a preclinical model of mania". In June 2013 I received Sonata BIS grant funded by the Polish National Science Centre (NCN) devoted to the establishment of a new research team and accomplishment of the research project entitled "Neurobiology of optimism: neuroanatomical and neurochemical survey sources of cognitive bias in an animal model". Currently I am coordinating 2 projects granted under the OPUS 12 and OPUS 16 programs by the Polish National Science Centre entitled: "Sensitivity to negative feedback as a cognitive biomarker of depressive disorder in an animal model" and "The role of cognitive bias in individual vulnerability to the transition from controlled use to uncontrolled abuse of alcohol in an animal model". Since 2011 I have been employed as an assistant professor at the Institute of Pharmacology, Polish Academy of Sciences, first in the Department of Behavioral Neuroscience and Drug Discovery and later, in the Department of Pharmacology.  Since 2013 I am the Head of the Affective Cognitive Neuroscience Laboratory. I was a scientific supervisor and promoter of 3 graduate students of Faculty of Biology and Earth Sciences at the Jagiellonian University in Krakow, Poland and currently I am scientific supervisor of PhD students employed in the research projects, which I am coordinating. I am a member of the European Behavioural Pharmacology Society (since 2007), Cambridge Neuroscience (since 2008) Polish Neuroscience Society (from 2014) and the Club of Fellows of the Foundation for Polish Science (from 2014). Since 2011 I am working with the Foundation for Polish Science, Polish National Agency for Academic Exchange and the Polish National Science Centre as a reviewer of applications for funding of research projects. I am also Associate Editor at BMC Neuroscience. I served as a reviewer in a number of scientific journals, such as: Psychoneuroendocrinology, Psychopharmacology, European Neuropsychopharmacology, European Journal of Neuroscience, Frontiers in Behavioral Neuroscience, Frontiers in Molecular Neuroscience, Behavioural Brain Research, Behavioural Pharmacology and Neuroscience. I am also reviewing editor in the Frontiers in molecular neuroscience journal.

My academic achievements include co-authorship in 38 scientific papers from the Journal Citation Reports database, 1 popular science review article and about 50 scientific communications, including 6 talks. I also delivered 7 thematic talks in Poland and abroad, including 1 during the 14th Brain Awareness Week in Krakow, Poland (2014). My research work has  been cited over 1400 times according to the Scopus database. Two of these papers were cited over 200 times and one over 300 times. In 2016 I was awarded the Prime Minister prize for distinguished habilitation.