The Science and Art Festival in the Institute of Pharmacology 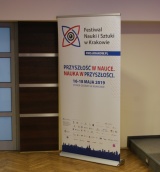 On May 16-18, 2019, the 19th Festival of Science and Art, the annual event popularizing science, was held in Krakow. The motto of this year’s event was "The future in science. Science in the future".
Each year the Institute of Pharmacology actively participates in the event. As part of a festival, the IF PAS researchers and PhD students provided a series of lectures presenting substantial scientific ideas related to neurobiology and pharmacology in an easily accessible language. The topics included the use of various animal model in the study of stress or emotions, early symptoms of schizophrenia, prevention of stroke, endocrine disrupting chemicals found in skin care cosmetics or the effects of neurotoxins produced by animals on the central nervous system. The participants were also invited to the institute laboratories, where they had an opportunity to observe and practice some laboratory tasks. The Science Festival in the IF PAS has been coordinated by dr hab. Agnieszka Wąsik.
We would like to thank the Festival organizers and visitors and we hope to meet you all again next year.
Photo by Marta Hereta.